The idea was conceived in 2012, and boy, has it caught on across the globe in the last seven years. Giving Tuesday, or more commonly mentioned as #GivingTuesday, is celebrated on the first Tuesday following Thanksgiving in the United States, but is an event that is celebrated worldwide.

The #GivingTuesday initiative, started by the New York’s 92nd Street and the United Nations Foundation, is a great way to create awareness about your charity project or promote your non-profit organization with a year-end campaign.

The day on which it is held is considered the “International Day of Giving” and gets the wheel rolling for the biggest charitable season of the year.

However, why only social media? With emails’ conversion rate outperforming that of social media by as much as six times and over 40 percent more internet users preferring email to social media for promotional messages, how can email marketing be left behind when it comes to #GivingTuesday?

Donations collected through emails historically account for two-thirds of all charitable donations.

As a nonprofit organization, if you are already leveraging social media for your promotions, adding email marketing to the mix is an absolute must. It will help you spread the word further and reach more donors.

However, sending emails, like the ones you send to your mother and sister, will not work here. You need a well-chalked out strategy that has been proven to work.

Here are three Giving Tuesday email ideas that you can implement right away to start seeing results.

1. The basics of #GivingTuesday emails

The first step in designing any email campaign is planning it out. Here are a few ways to help you map out your #GivingTuesday email campaigns for maximum effectiveness.

Keep it simple and snackable (K.I.S.S.)

With most emails now being viewed on mobile devices, you want to ensure that you are making your messages simple, sweet, and snackable, something that looks and reads too good to ignore.

Take this example from Oxford American. Instead of going with a flashy email full of images, videos and other distractions, they keep the design simple with an easy to spot call-to-action should the reader choose to give instead of reading the email in full.

Raise awareness for your cause

The meat of your email message should be focused around the cause. There should be absolutely no ambiguity about what you are talking about and why it is absolutely necessary to donate to the cause.

When scripting a Giving Tuesday email, do keep in mind that the primary aim of your email is to sell the idea. Donations happen only if your readers are convinced enough that your specific cause warrants it. However, instead of focusing on the “logical,” you want to be sure to appeal to their emotional side.

It's about conveying the message as strongly as you can.

Ask for a donation (of specific amounts)

This one is super important because most individuals have an inherent tendency not to take action unless we are told to.

Even though it might seem rather unnecessary, your readers need that little nudge and a specific direction to follow before they decide to open their wallets, even for a nonprofit objective.

Check out the image below to find out how Andrew Jackson’s The Hermitage pulls it off.

2. Add a little #GivingTuesday spice to them

To top off the basics of the email, you need to complement it with a bit of an X-factor of its own. Talk about putting the icing on the cake? It’s precisely that. It is about making your Giving Tuesday email different from hundreds of others that your reader will perhaps receive on that very day.

Tell a story that makes you “human”

We, humans, dig stories, whether as a Kindle eBook or in a brand campaign. In fact, studies have proven that storytelling makes your message 22 times more memorable.

Don’t just list facts and statistics in your email. Tell a story that connects with your readers and make you seem more “human.” It is always more preferable to get an email from a friend asking for donations than a big organization doing the same.

Make use of a countdown timer

This is a clever tactic where you put in a countdown timer right on top of the email or above the call-to-action button. It will give them a strong reason to act at that moment. It tells them it’s urgent and the event runs for a limited time only.

Even if you think a timer is overkill for the job, you should consider putting a deadline for the donation event. This creates a sense of urgency for your readers, encouraging them to act now before their chance is gone.

Use audio and video clips in your email

With high-end email marketing platforms like Delivra, you can embed audio and video clips inside your email to make the message more relatable and persuasive for the recipient. It might be a short voice message or a short video clip that hits “the right buttons” of your followers.

Moreover, it can be a great way to differentiate yourself from the rest. Unfortunately, many marketers have yet to start implementing audio and video clips even though it helps increase your reader engagement by keeping them on your message longer or directing them to a landing page on your website.

In this example by the Whale and Dolphin Conservation group, they include a video clip in their message to readers to help keep donors informed on their mission and what they are doing to help the animals in need. 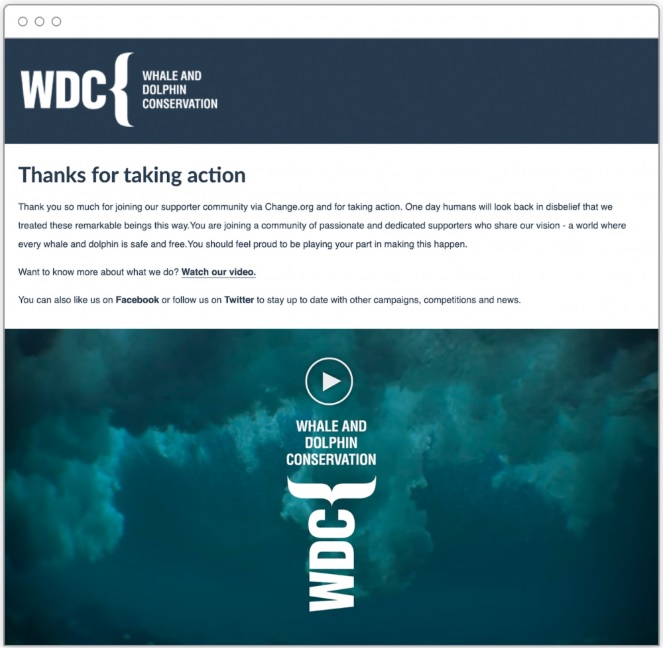 3. Maximize the reach of your email campaign

We covered how to create the basic structure of the email and then sprinkled in a few “delicious” additives to it. However, how do we get to maximize the reach of the email campaign itself?

Sure, while the email you sent may have landed in their inbox (providing that their email client’s spam filters didn’t prevent it), but did they open it? Okay, you say they did open it. Great! But did they share it with others?

Let’s talk about these.

Always insert social sharing buttons in your #GivingTuesday emails. Do you know why? It’s because your readers actually love sharing these emails as it puts them in a positive light and gains them social currency in the process.

Rule of thumb: Make the buttons a bit bigger and more prominent so that it jumps out at your readers and literally asks them to click and share.

Some readers might not be able to donate anything during your campaign for many reasons. But it’s okay because you can ask these people to donate their “time” instead.

What it means is, you can ask them to volunteer for your campaign instead. Ask them to let their colleagues, their relatives, and their friends know about your campaign.

If there is an offline event, ask them whether they would like to take part in that.

Time, that’s all you want.

Some readers might not be able to donate anything during your campaign for many reasons. But it’s okay because you can ask these people to donate their “time” instead.

What it means is, you can ask them to volunteer for your campaign instead. Ask them to let their colleagues, their relatives, and their friends know about your campaign.

If there is an offline event, ask them whether they would like to take part in that.

Time, that’s all you want.

Let’s face it. As many as 75%―if not more―of your total subscribers will not open your emails at the first instance. People are constantly checking their inboxes, with the average person checking in roughly 15 times a day.

That’s going to lead to some messages being skipped over. That’s why you want to make sure you are staying relevant in your subscriber’s inboxes. Sending a series as verse to a one-off campaign is a great way to approach this.

Consider starting a few weeks prior to Giving Tuesday to introduce your campaign. Then, follow it up with a holiday message, wishing your readers a happy Thanksgiving. Then, over the weekend, remind them that Tuesday is the big day before sending out your final messages on the big day.

Play with the length of the email

Sending long emails, as a practice, is not wrong. In fact, many email marketers see plenty of success by sending super-long emails.

Were these long emails working for their campaigns? They must have or they would have been scrapped long ago.

That said, do note that we are living in a fast-paced age. Everybody is rushing their inboxes for a few minutes, scrolling down their social timelines for another few minutes and then, back to work!

So, many of your readers may prefer short emails to longer ones. The only way to determine what your readers prefer is through A/B testing.

Use graphics available on the #GivingTuesday site

Last but not least, do consider using the visual assets available on the #GivingTuesday official site. Since it is a Giving Tuesday email campaign, it helps to include a logo or other graphics into your email if you can.

When it’s from a site they love and care about, you get extra brownie points.

Here’s a recap of what you should do to make your #GivingTuesday email campaign a success.

To make it more interesting, you can tell a human story, embed an audio or video clip, and propose an end date to the campaign.

To maximize the reach of your campaign―

If you keep all these tips and tricks in mind while designing a Giving Tuesday email campaign, it’s sure to be a success.

Need some additional tips on creating an event email marketing plan? Then make sure to check out our short guide today!