It’s been more than 5 years since the cookie brand Oreo demonstrated the power of real-time marketing with this single tweet: “Power out? No problem. You can still dunk in the dark.”

In the wake of a 34-minute power outage during Super Bowl XLVII, Oreo’s media company 360i immediately went to work to brainstorm and approve—within minutes—the visuals and the message. The payoff was 10,000 retweets in one hour. It was described by fans and advertising gurus alike as brilliant.

Think about that. The average cost of a 30-second Super Bowl ad that season was $4 million. And that’s just the price tag for airing the commercial. Millions more were likely invested in the production of each commercial.

Digital marketing has continued to evolve over the past five years, with many brands—both large and small—incorporating real-time marketing as part of their strategies. They’re demonstrating how much impact you can have through the practicing of listening and engaging in real time.

The most successful marketers also are realizing the importance of utilizing numerous channels—social media, email, paid media or earned media—to harness the power of real-time marketing.

We reviewed the past 5 years to highlight what you can now do with real-time marketing, including some that have gone viral and other strategies that are engaging their customers on a day-to-day basis. Use the following examples and takeaways to power up your own email marketing strategies.

One of the most important lessons you can gain from real-time marketing is to actually listen to your customers, your followers. Wendy’s, the fast-food burger chain, is known for excelling at real-time responses to comments and posts on social media.

So, when super nugget fan Carter Wilkerson posted this simple tweet, “Yo @Wendys how many retweets for a year of free chicken nuggets?”, Wendy’s quickly responded, “18 million.”

A simple response. Likely unattainable. But it was game on. “Consider it done,” Carter tweeted in his 2017 post.

In the weeks that followed, Carter’s appeal for retweets went viral—to the point that he dethroned popular talk show host Ellen DeGeneres for the world record of the most retweeted tweet.

Not only that, other celebrities and brands jumped in to help Carter reach his goal, including Microsoft, Google, Amazon and Apple Music—proving that listening to what’s going on with other brands is a must as well. He even appeared on the Ellen show.

One tweet as a response. Maybe it took a second or two. And Wendy’s gained weeks worth of national publicity. Job well done.

Takeaway: You can hit a home run with your subscribers every single day. Timely responses to your subscribers are essential to an effective digital marketing campaign in today’s world. Remember that people want to engage with you on different platforms. You can create a brand advocate at scale through automation and engaging content.

While social media is an obvious way to communicate, don’t forget the many ways you can offer real-time email responses to your audiences based on their interactions with you.

Look for opportunities to engage. Like many online retailers, Gap notifies customers when a shipment is on its way. And then lets them know when it has arrived. 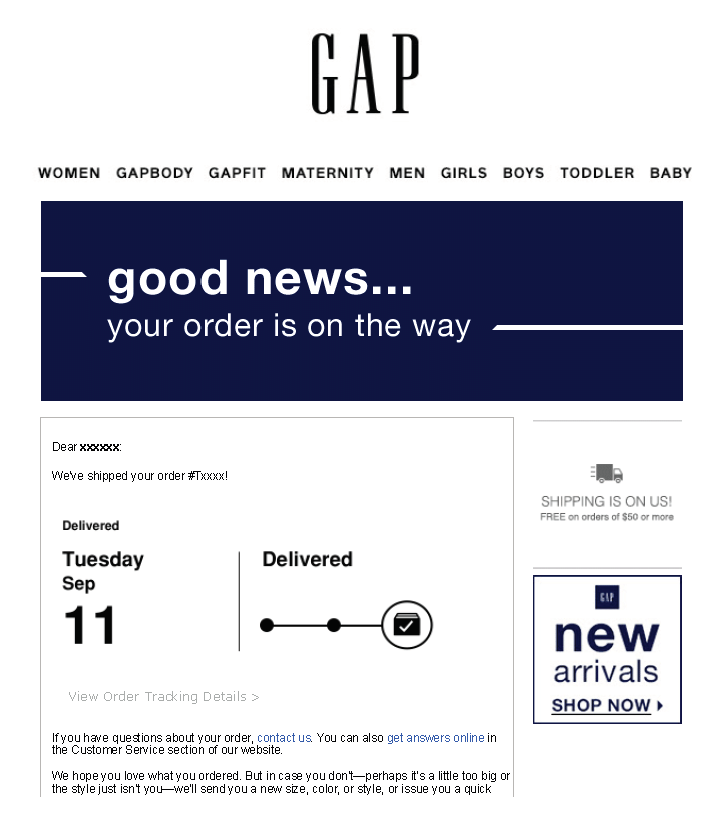 Zappos sends a message following delivery, along with an image of what you just purchased with a short quiz, inviting feedback. 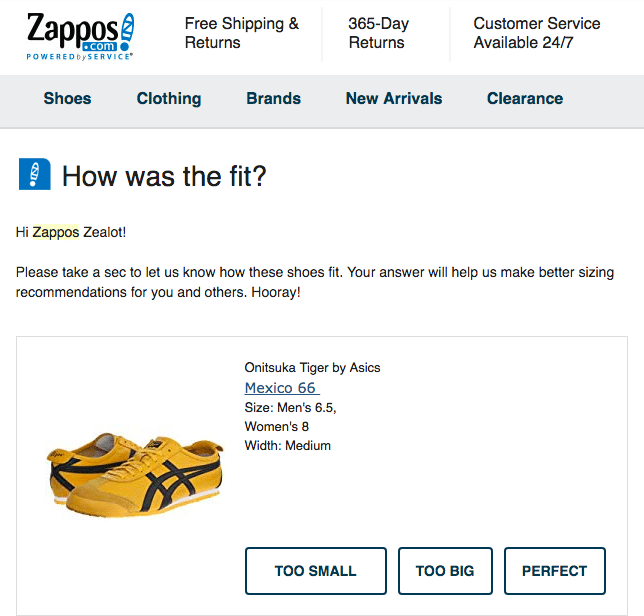 After its customers hit up an ATM at another financial institution, Fifth Third Bank sends an email reminder that they can save a few dollars by driving a few blocks down the street to use their ATM. 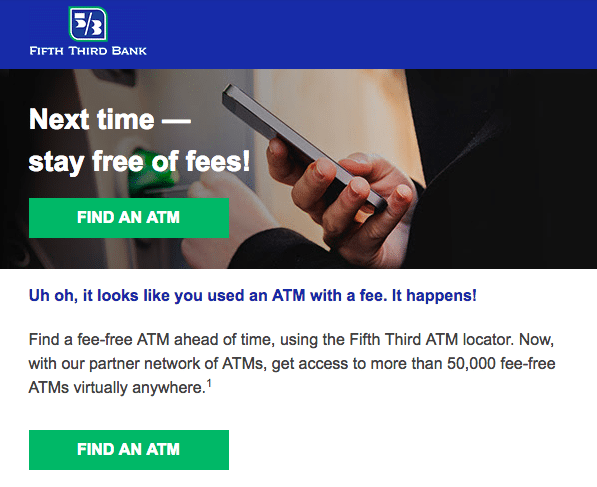 Fights on social media are nothing new. Whether it’s between celebrities, politicians, regular folks or brands, sometimes things can get downright cringe-worthy. Two respected London institutions would be considered the unlikeliest to engage in a Twitter battle.

But that’s exactly what happened when a museum-goer asked this question as part of an “Ask a Curator” presentation: “Who would win in a staff battle between @sciencemuseum and @NHM_London? What exhibits/items would help you be victorious? #askacurator.”

The ensuing “battle” not only got the attention of Twitter followers, but numerous online publications also highlighted the posts of the National History Museum and the Science Museum.

With this type of dynamic engagement, a conflict between the two institutions, both were able to showcase their exhibits and attractions more effectively than if they had simply posted them as part of a planned marketing campaign.

Both institutions also showed the power of being willing to jump in wholeheartedly with a “competitor” and to show a bit of humor.

Takeaway: Think of creative ways to educate your subscribers about your institution. Keep your copy dynamic. If you have an event, send real-time messages about what’s happening.

San Diego Zoo does this by regularly sending timely updates, including videos, photos, and copy, about happenings at its facility. Think of a coordinated marketing strategy that includes a mix of emails, Facebook live videos, and social media that engage your audiences and invite them to your site for more interaction. 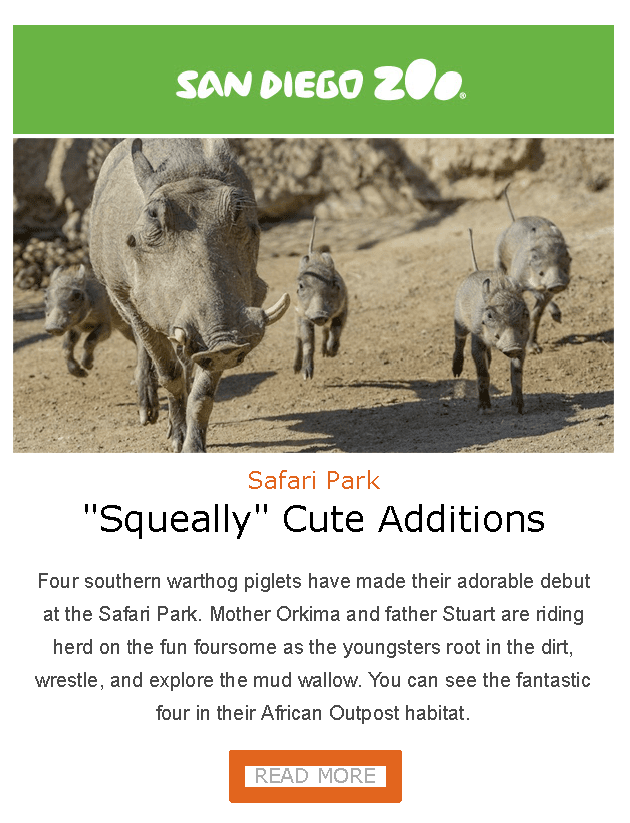 Millions and millions of people worldwide guzzle some type of caffeine drink in a Starbucks coffee cup every single day. It makes sense that Starbucks would have a comprehensive marketing strategy that includes real-time marketing.

While Starbucks regularly takes the lead in thoughtfully producing campaigns as part of its advocacy for race relations, veterans, sustainability, and other topics and creating whimsical promotions for its latest concoctions, it also is committed to real-time responses.

As part of its social media presence, Starbucks regularly responds to its customers quickly, typically within an hour.

And it’s no surprise that Starbucks has handled its share of complaints that could have potentially torpedoed the brand. One of the most high-profile was the racially-charged arrest of two black men at its Starbucks location in Philadelphia. In the wake of the social media firestorm that followed, Starbucks immediately took action to propose training for all of its employees.

The coffee retailer also has a history of accepting blame for decisions related to its menu. Such was the case in 2014 when it decided to suspend its seasonal eggnog drink in favor of a new flavor.

Customers expressed their outrage on social media: “@Starbucks The eggnog latte was the only thing keeping me from beating people during the holidays. Please bring it back.”

Another group actually started the petition “Countdown to Red Cups” as an appeal to bring back the eggnog latte. It didn’t take long for the petition to get more than 2,500 signatures.

More importantly, it didn’t take long for Starbucks to respond with an apology and a promise to bring back the eggnog. Which it did.

@Starbucks The eggnog latte was the only thing keeping me from beating people during the holidays. Please bring it back.

By doing so, Starbucks continued its reputation for actively engaging with its audiences in real time.

Takeaway: Whether someone tries to contact you to issue a complaint, ask for a refund — whether via email, social media or a phone call, it’s always a good idea to reply immediately and with the right attitude. Never keep someone waiting to hear back from you. An automated message via email can be the first line of response until a human responds.

Most customers expect a response in real time.

Not all real-time marketing is associated with a sports game, a PR crisis or an engaging viral challenge. Sometimes catastrophic events can pave the way to opportunities for real-time marketing, as Progressive Insurance recently revealed in the wake of news that Hurricane Florence would be destined to hit the coasts of North Carolina, South Carolina, and other nearby areas.

In a series of tweets, Progressive offered tips on how to prepare for the storm and where to seek help. It also retweeted tips from other sources, including the American Red Cross.

Not every brand should be jumping on the opportunity to engage with potentially catastrophic news, but as an insurance company, Progressive’s appeals are highly appropriate.

And, speaking of the American Red Cross, the disaster relief organization has a history of engaging in real-time marketing—jumping on trending events to get its message out about emergency preparedness.

With the popularity of zombie films and movies like The Walking Dead in 2010, it released campaigns on numerous channels related to surviving a zombie apocalypse. The campaigns were well received.

During the TV movie Sharknado in 2014, the Red Cross featured a live Twitter feed to start discussing how to prepare for a disaster in the wake of a “highly grotesque and terrifying situation of having a tornado full of sharks bearing down on our hometown.”

Both instances showcase the ability to stay tuned to real news and trending media events to get your message across.

Takeaway: You don’t have to be a news outlet to keep your subscribers updated on news that is relevant to your industry. During times of natural disaster, you can provide a service by providing timely updates. While CNN is a news outlet, you can borrow a few ideas from this concept. 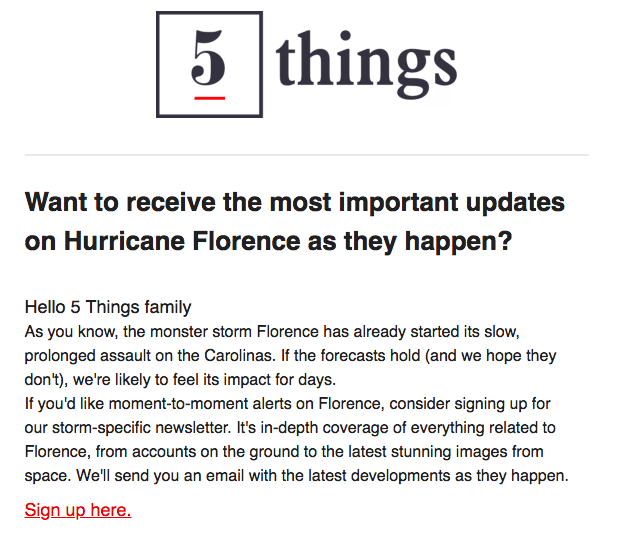 5. The airline that cares enough to throw you a little welcome party.

JetBlue Airways has built a reputation for going the extra mile, so to speak, for its customers.

But it went way over the top when it responded to @Alexa_Burrows in a series of real-time tweets. During a return trip, Alexa tweeted: “Goodbye, California! Thanks @JetBlue for the #flyfi!

JetBlue followed up with a series of tweets that could have been exchanged between close friends…You’re welcome, Alexa! Hope you enjoy it! Headed home?

And then Alexa replied, “Yes! Back to Boston! I expect a welcome parade at the gate. 😉

JetBlue asked if a Twitter parade would suffice and included a few celebratory emojis in its tweet.

That could have been the end of the story. Surely, Alexa would have felt great with the exchange. But, to her astonishment, when she got off the plane, a crew of JetBlue team members was waiting for her … with welcome signs and all.

Quick thinking, quick response and a willingness among your team members to support your real-time marketing initiatives made this approach a huge success. And more than likely created a strong brand advocate and customer for life.

Takeaway: Make someone’s day with a show of appreciation. With marketing automation, you can deliver a timely thank you email with every purchase or a timely response with every interaction. Use language to ensure that it comes across as genuine, friendly and warm.

Lulu’s, a clothing retailer, brings its personality into the mix with a friendly thank you note … short and made even sweeter with a 15% off of the next purchase. 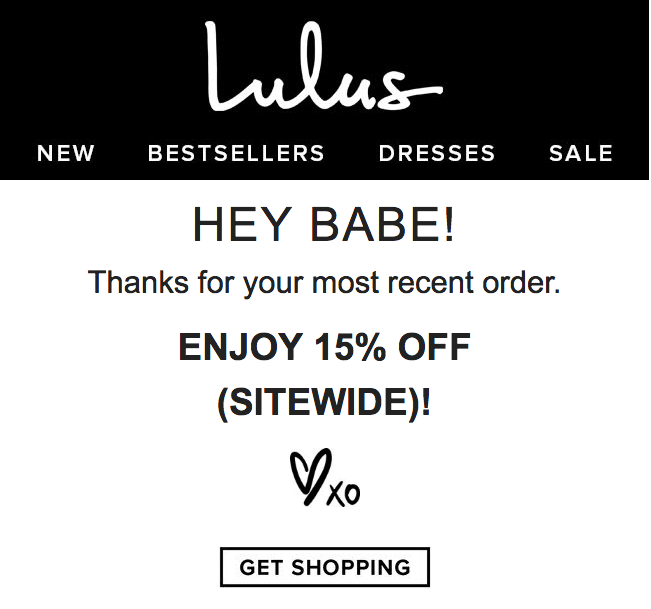 You also can show appreciation through customer rewards programs that tally up the points as a person purchases services or products through your company. Companies in the hospitality industry benefit from these type of interactions, making it easy for travelers to keep track of their points or to find relevant information, such as hotel recommendations. 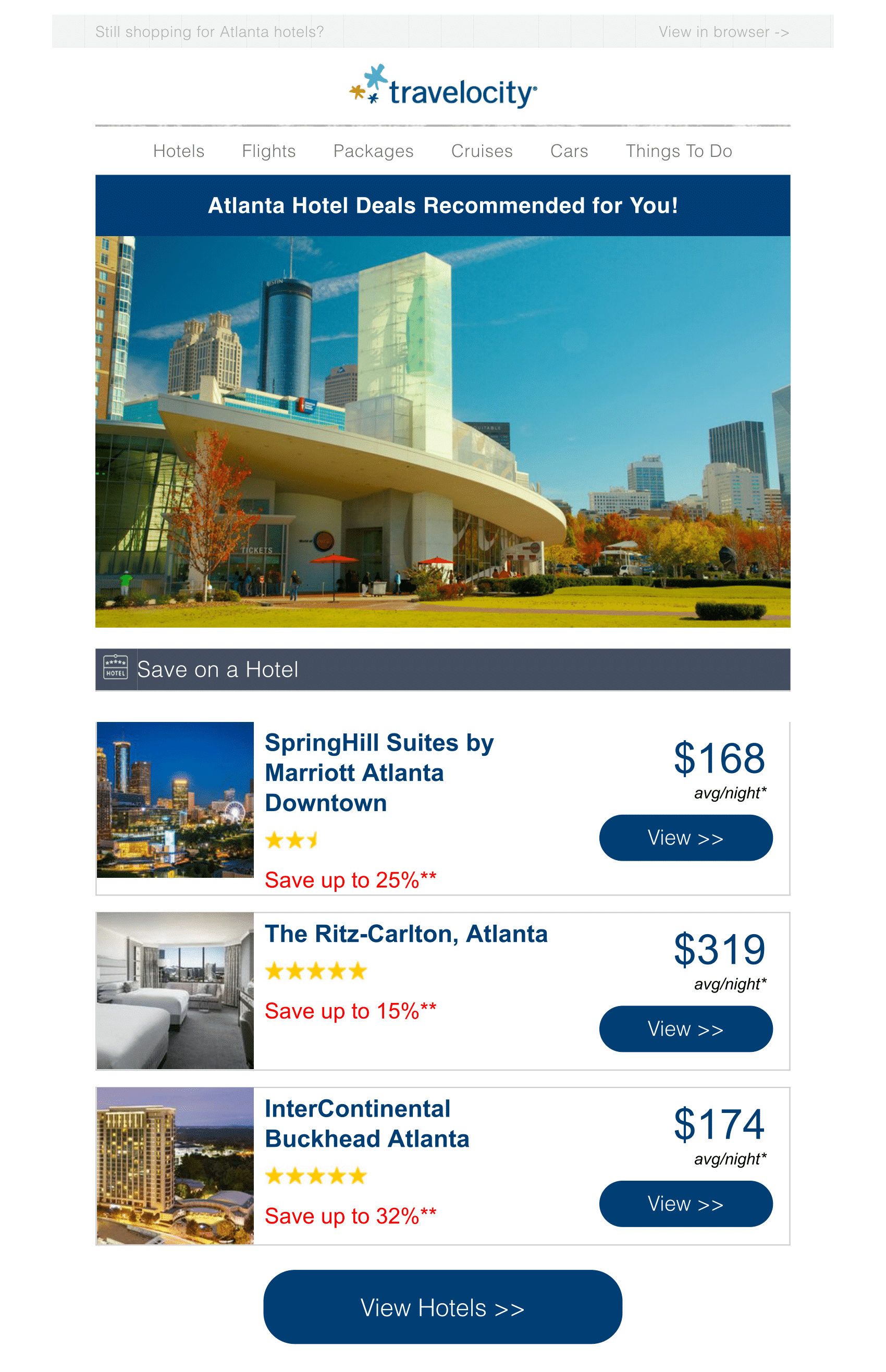 Explore the benefits of real-time marketing.

Real-time marketing doesn’t necessarily have to go viral to be successful. By engaging your audiences in real time and staying abreast of news that’s relevant to them, you’re able to build real connections that enhance your brand.

Find out how Delivra’s user-friendly marketing automation can help you realize your goals. Contact us for a demo today.